Aboot how scars are formed

So when Jenn—one of the Canadian lesbians I’m seated between—rarely turns from her window view to join the conversation I’m having with her friend Cari, I figure it’s just fear of flying. I’ve flown with white-knuckled Canadians before. I know the signs.

It’s only later that night, after waiting out a city-wide blackout together in Cusco, that Jenn reveals what was really causing her chatter aversion. 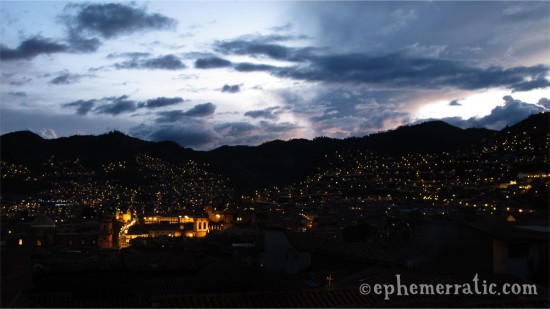 The flight from sea level Lima to two-mile high Cusco is over in less than an hour, just enough time for Cari and I to figure out we want to hang out more in Cusco.

As I walk off the plane, an expanding sensation washes up my nerves starting at my toes. My body feels like the air that conducts a supersonic shock wave must feel, but with less of a sense of accomplishment. The sensation settles unsteadily in the fluid surrounding my brain. It’s unpleasantly odd.

As I wobble and chug water to combat my body’s aversion to the significant change in altitude, I introduce Cari and Jenn to Todd, who’d been sitting a row back. On the ground, Jenn’s making eye contact and is even downright friendly. We make plans to explore, drink, and eat together later. 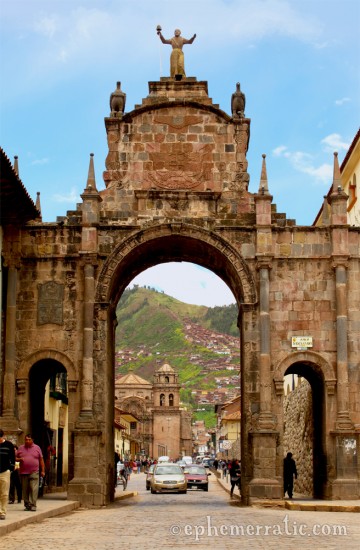 The view to the hills through Arco Santa Clara, Cusco, Peru

Over a round of pisco sours that night at Los Perros Couch Bar, we trade scar origin stories. Jenn, who frequently breaks, sprains, or tears some part of her body, has the most impressive and numerous. Her newest scar is still forming, a fresh purple gash from pinky surgery she had just days before leaving for Peru.

As the night rolls on and we bar hop to El Pisquerito, our conversation flows from scars to buckets of bacon to the graphic death of luger Nodar Kumaritashvili to Cari and Jenn’s plans to sandboard in Huacachina, Peru. Todd and I have both insufficient health insurance and nonexistent disability coverage, so we’re vicariously envious of Cari and Jenn’s sporty stories.

Suddenly, the bar goes dark. Once we realize that the lights are out throughout Cusco, we settle in with our recently refreshed drinks, lit only by the weak light of our cell phones. The bored bar staff cluster in a far corner, alternating giggles with un-unnerving cries of “Booooooooooo!” and “Mwah ha ha ha!” 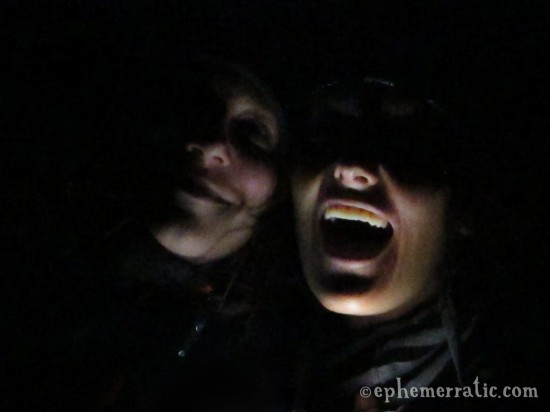 Jenn and Cari in the blackout in Cusco, Peru

It’s then that Cari asks Jenn, “What was up with you on the plane? You weren’t talking or anything. Were you freaking out about flying?”

“Oh my god. Didn’t you see?,” Jenn asks. “Across the aisle. One row back. Didya notice the three guys in sunglasses?”

“Yeah, sure,” I said, “the three tall guys. They were scarfing McDonald’s in the airport before we boarded. It was gross. They looked totally hungover.”

“Well, one of the guys, while we were taking off, started throwing up into a plastic bag. And he did it a couple more times too. So whenever I looked over to try to talk with you guys, that’s all I saw. Some complete idiot throwing up—”

“Ewwww,” I say laughing. “I’m so sorry you saw that. But I’m relieved, too! I thought you didn’t like me or something.”

“No no! I just…I don’t like flying anyway, and that just sent me over the edge. I started having a mini panic attack because of it! It was one of the worst flights ever. I’m totally scarred.” 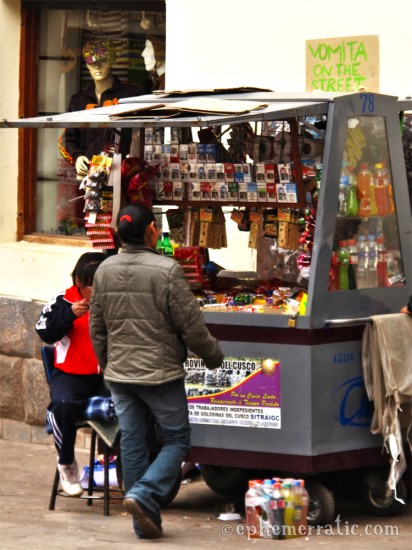 Vomita on the street, okay?