Back in Pre-Hispanic times, two ethnic groups in the Colca Canyon area of Peru deformed their babies’ skulls — the Collagua into a taller, tapered noggin, the Cabana into a mesa-shaped cranium.

Was the Collagua’s headscaping a disturbed bid for a permanent Bumpit? Was the Cabana’s reshaping a misguided effort to gain a competitive edge in breakdance headspinning? Or were these groups just looking for a way to easily spot friends in a crowd, like those older tourist couples who wear matching outfits?

It really doesn’t matter. There isn’t a good reason* for squashing a baby’s head.

Ultimately, someone came to their senses — probably the first parents who were no-shows to the Infant Cranial Deformation Jamboree — and realized that a distinctive hat would give ease of recognition without extreme body modification. 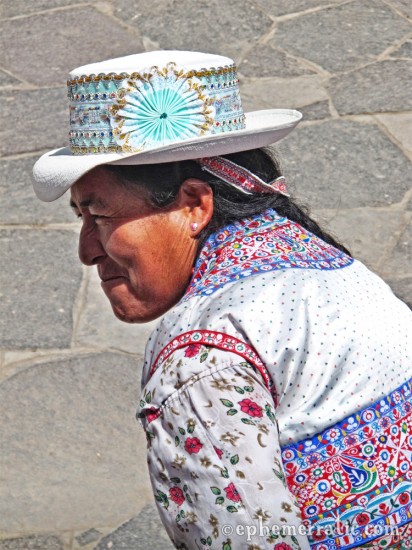 I’d smile too if I had that hat.

Today, women of Collagua descent wear flat-brimmed straw hats circled with a colorful, bejazzled band. Cabana women wear rounded hats, brim flipped up in the back, covered with embroidery inside and out.

I’ve been admiring both hat styles during our time in Colca Canyon, impressed by the craft, time, and tough calluses that must go into making them. I’m also a fan of practical things imbued with bespoke flair, like handmade Halloween costumes, personalized beer cozies, and fashionista hoodies. I’m curious about how the hats are made and also the meaning of the symbols that adorn them.

While waiting for the bus that would take Todd and me out of Cabanaconde to Arequipa, I noticed a behatted Peruvian woman loitering alone in the plaza. Dragging Todd along as translator, I tell him to tell her I like her hat, ask her if she made it, and how long it took to create.

“En un día,” she responds politely but shyly, as if the results are no big deal. All the while she glances around the plaza for someone to rescue her from my chatter.

All that elaborate work, done in one day. Her hat looks new, which makes me want know how many hats she has. I wonder if she used the same design as her mother does, or if it’s uniquely her own. As I start telling Todd my next question, she takes off her hat and hands it to me, then wordlessly points to my camera.

“I think she thinks I want a picture of myself wearing her hat,” I say to Todd. “What should I do? Is it weird? It seems weird.”

“Give me the camera,” he insists.

“Mi cabeza,” I laugh as I try to squash the hat on my head, “es grande!” That much Spanish I know.

She won’t join me in the photo, brushing her hand over the top of her hair as if to indicate: “Not with my hair looking like this.” 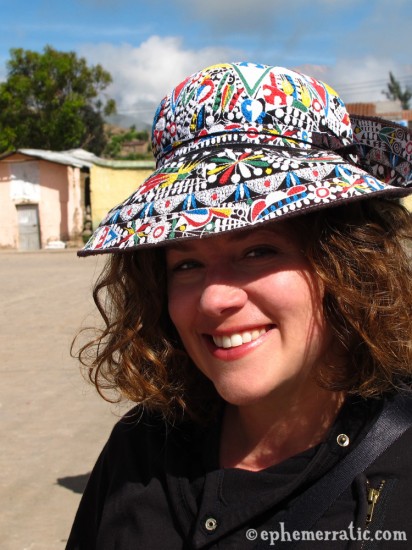 Not bad, if precariously perched.

I reluctantly, jealously return the hat. 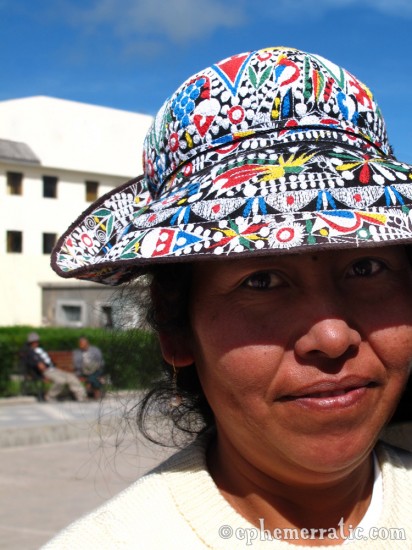 She wears it better.

__
* Here is one historical account of the reasons why the Collagua and Cabana shaped their heads (or if you prefer happier thoughts, skip over to a photo essay of Peruvian wildflowers):

“[In 1586, Juan de] Ulloa Mogollón [a Spanish official] left a record of a strange, yet intriguing form of mountain worship that involved transforming humans into representations of peaks. The Collagua…believed their paqariku (place of origin) was a snow-capped volcano called Collaguata…to honor it, they bound the malleable heads of their newborn children to make them tall, thin, and slightly tapering, in imitation of the peak’s shape…”

“The residents of [Cabana] province…thought they originated from the summit Gualcagualca, which they considered holy. As an expression of their devotion, they wrapped white cords around the heads of their babies, circling the crown numerous times. This procedure caused the skulls to flatten out on top and become very wide, mimicking the outline of Gualcagualca.”

← In the sun, in the shade
Colca Canyon and Cabanaconde, Peru travel guide – The YEH, MEH, NAHs →