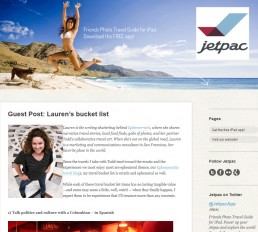 I blew my writing wad this week on a fun guest post on Jetpac and on a Peru travel story about the deaths of two guinea pigs, one a pet, one a meal. I liked the guinea pig story so much that I’ve pitched it to a travel editor in hopes of achieving fame and fortune (or more likely: a byline on paper and few cents per word, but that’s not a complaint).

While the guinea pig story has to stay under wraps (bacon wrapped, that is), I can share the guest post. Jetpac asked me to write out my travel bucket list, and I agreed so long as I could skip the tropes of listing big-bang sites or countries. Instead I focused on bucket list items that have no lasting tangible value and some that seem a little, well, weird; thus: Ephemerratic!. When they finally happen, I expect to treasure these experiences more than any souvenir.

1) Talk politics and culture with a Columbian – in Spanish

I may write a mean metaphor, but I can only do it in English. I’ve never been swift at learning another language, and my half-baked efforts at learning Spanish have thus far been confounded by confusion with the little high school Italian I still remember. One day, hopefully not too far off, I’d like to travel to Columbia with enough Español in my noggin to have a meaningful conversation about politics and culture with a local. And why Columbia? ¿Por qué no?

What do you think of a travel bucket list that only includes ephemeral experiences? What would be on yours?

← Pisco sours: Drinking and making a tasty little bird
Wetting my whistle with someone else’s spit →