Marinated, char-grilled skewers of cow heart schmeared with hot pepper sauce, bought from a smoke-shrouded street food vendor. If that vision of Peruvian anticuchos doesn’t get your lips smacking, you may not be ready for this. 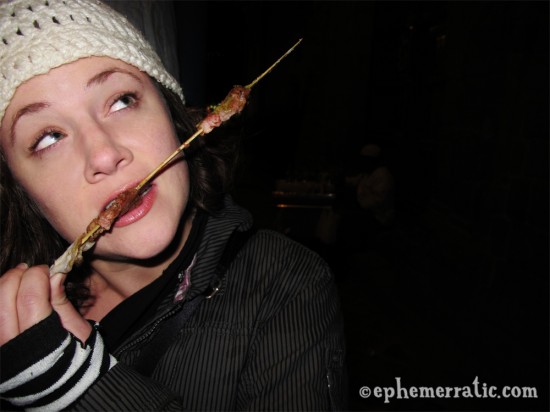 “Uno anticucho, por favor,” Todd shouts over the crowd that surrounds a woman working the grill at a small street food cart in Cusco, Peru.

“¿Pollo?” she responds, half asking, half telling.

“No, vaca.” Chicken we’ve had enough of, and beef is really what summons a swarm around an anticuchos grill anyway.

She gives us a surprised sideways glance. “¿Lomo, no?”

“No, corazón,” I jump in faster than Todd, a bit more anxious to get this right.

Though Todd’s been studying the language, the Spanish word for heart is one we often share inside-joke laughter over and so both know well. Our proudly half Colombian friend Dan had once pointed out that “corazón” shows up in the lyrics of every single Spanish-lanugage pop song. Since then, Todd and I have listened for tuneful corazóns throughout our Peru travels, and have yet to find a song without it.

Hearing us ask for heart, the grill master turns to look straight at us. She’s rapidly evaluating our gringo-ness versus our salivating interest in her stacks of meat. She’s weighing our request against everything in her experience that tells her that pasty-faced folks like us can’t seriously want a bunch of cow’s heart stuck on a stick. We fail her evaluation.

Shaking her head she decrees, “Lomo.” Tenderloin is for tourists. 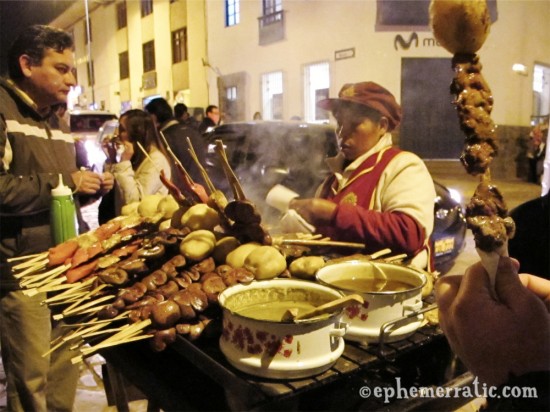 “No lomo. Corazón por favor. ¡Carne de corazón!,” I repeat while putting my fist to my chest and thumping it against my breast bone, Tarzan-like.

She purses her lips and rolls her eyes, making an expression that tells me I’d hear a disbelieving, disapproving Marge Simpsonesque “Hhrrrmmmm” grumble if the street noise went away.

Smooth as a Vegas card dealer, she glides her hand over to the largest group of meat on the grill. Before handing the thick skewer to Todd, whose hand is already reaching out and grasping in anticipation, she slathers the meat chunks in a creamy green hot sauce. 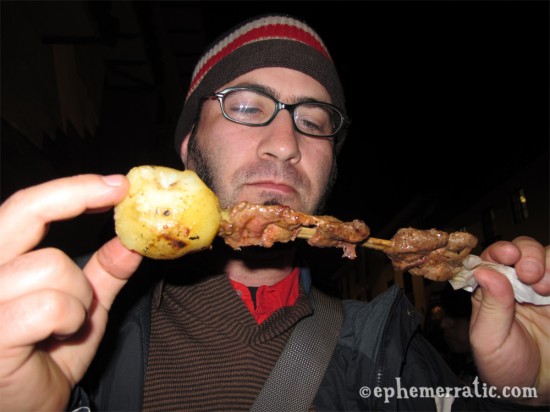 If the way to a man’s heart is his stomach, what if he’s eating heart?

Speared on the skewer’s far end is a whole boiled potato, which throws the skewer’s balance out of whack like bat corpses on Inigo Montoya’s six-fingered sword. The rest of the stick is pearled with oversized chunks of dark red meat, infused with a hint of sanguinary metallic taste.

We linger on the sidewalk, trading at tearing off bites of spicy, smoky heart. By leaning forward over our toes, the juice drips freely onto the curb, less so onto our chins. We drop most of the potato at some point and don’t much care.

We found our Peruvian anticuchos on the streets of Cusco, Peru. Where did you eat your favorite anticuchos?

← World Domination Summit: How I’m investing my $100 to make the world more awesome
The color of travel →