I’m not the kind of chick who cries. Though I’m overflowing with empathy, I’m cut from stoic stock. I cry more often while cutting onions than from sorrow or joy.

Yet, at the bottom of the world’s deepest canyon, I bust into a savage crying jag just because it’s off season for the hot springs and no one told me. 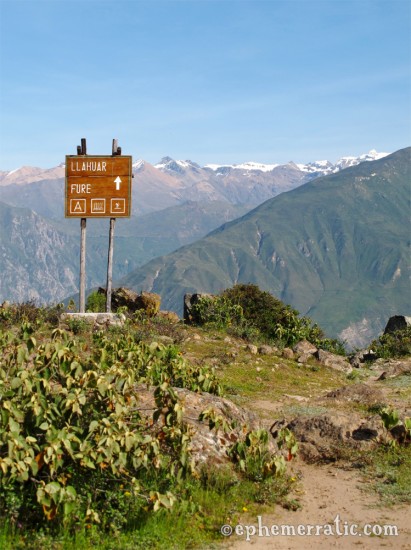 When I travel, most times, everything works out. I get what I want and even things I didn’t know I wanted. At those times, my world is perfect and I am in love with it. Big hugs for everyone.

This time, I find myself in an insignificant village whose name I only learned to pronounce yesterday, physically and mentally exhausted from a five-hour trek into a 3,300-foot deep canyon — only to find out that the relaxing activity that had kept me motivated during the hike is non-existent.

I have no energy left for emotional control. My world seems wretched. Hence the crying.

I really would’ve felt better if I’d punched something. But there was only Todd, so cute and willing to carry our heavy water; some rocks, the punching of which would only have added to my pain; and Yola, the owner of Llahuar Lodge, who will provide me with food and a bed so long as I don’t try to pay in punches. 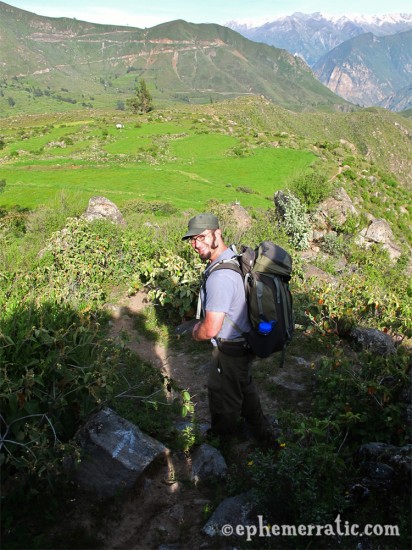 You can’t punch this.

Before starting on our trek from relatively civilized Cabanaconde, Peru into the depths of Colca Canyon, I’d been the one who advocated to go to Llahuar. It seemed like a smaller, less trekked-to village than the Oasis at Sangalle, which we could still visit on our trek back. There wasn’t a lot of information on Llahuar, but what I found was promising.

Leaving Cabanaconde just after dawn, we walk knee-deep through wildflowers and dew along the ridge. The sky clears early of the canyon’s notorious clouds, revealing views of volcanic mountains above and the Rio Colca below.

A guttural, trilling bawl — like the sounds made by startled Sand People in Star Wars — echoes around us. Topping a hill, we find a sheep dog taunting donkeys into haws of frustration (and later learn donkey brays were used to make Sand People sounds). 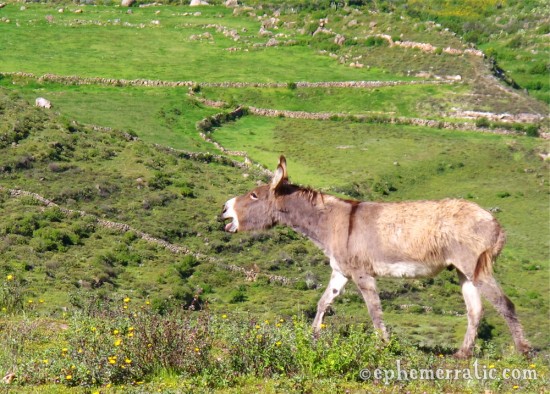 As we descend into the canyon, it’s clear that the route Llahuar is lacking in practical trail-like qualities. Cut into the steep side of the canyon, parts of the narrow path are washed out by recent rains. The trail is composed of uneven, sandy gravel; covered with rocks that shift underfoot; and blocked by boulders over which we must scramble. 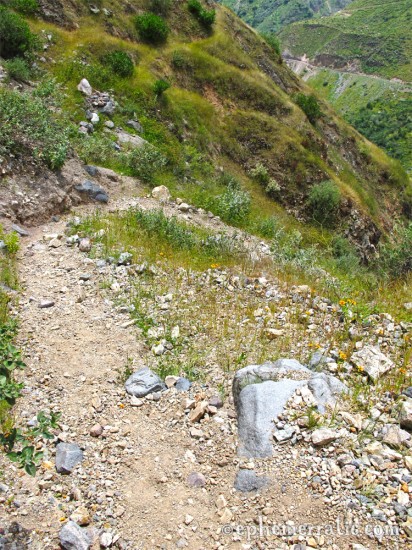 This is not a pipe. It is also not much of a trail.

Colca Canyon also needs more dung beetles. There’s donkey and sheep shit everywhere. Wherever it looks safest to place my feet, there’s a nubby turd, guaranteed. I avoid the fresher ones, the kind that’ll stick and stink. Quickly inured to the dry shit, I step right through it, trying to kick up and breathe in as little dung dust as possible.

The path switchbacks down — and only and ever down — steeper with each turn, requiring mincing steps. When I glance up from my feet, I inevitably slip, never off balance enough to bring me to my knees or ass, but enough to remind me to concentrate. To fall on some stretches of path could mean falling into the canyon.

Then, the donkey shit is overwhelmed by colossal cow diarrhea that covers the trail in explosively gruesome Rorschach blots. It takes Olympian leaps to cross these lakes of poo.

Just as I’m about to wonder aloud, “Where are these crapping cows?,” a black bull crashes across the path, diving into the bush just ten feet ahead of me. Todd, trained in Latino cow bullying during a long-ago trip to Nicaragua, picks up a few threatening rocks. Creeping down the trail, we’re watched by two bulls, a cow, and a calf hiding in the bushes. We hustle by, ready to bolt if the cows so much as moo. 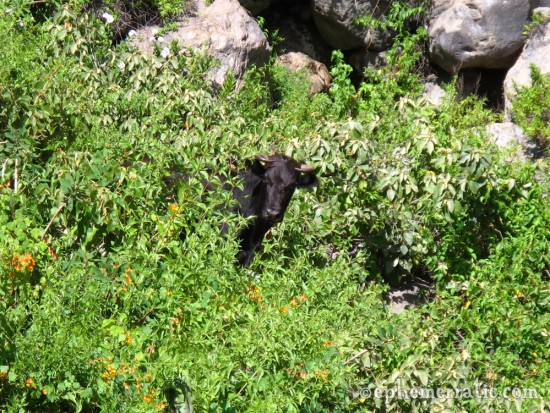 He just wants to bum some Imodium.

Hours later, the path finally hits the canyon bottom, meaning we’re still at least an hour away from Llahuar.  As we pause to stretch our tired muscles, a demoralizingly dark cloud front surges our way over the canyon rim. Thunder grumbles, sounding both horizontally and vertically distant, but closing in fast.

We’ve got to out-hike the approaching storm. It’s not the rain that worries us, but the real risk of a flash flood hurling at us while we’re still in the narrow canyon bottom. 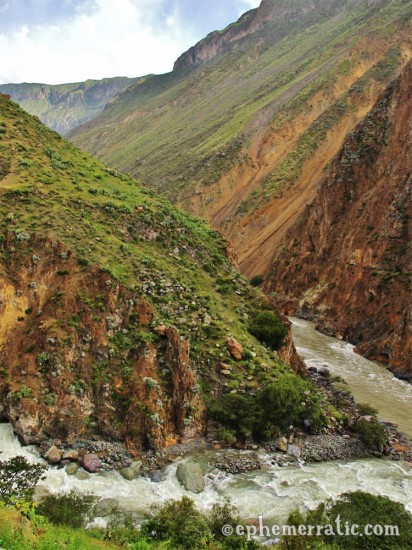 The river bend at Llahuar.

I knew you were going to say that

Pulling out our last energy, we cross the river and cover the last — and blessedly uphill — stretch, double time. My ever-so-slightly bum knee starts to wobble. We swallow the last of our water. But we arrive at Llahuar before the rain.

I’m ready for my rewards. There shall be cold beer, a hot hot tub, and grilled trout just fished from the river — and sitting, lots of sitting.

In my broken state, I don’t believe Yola when she tells us there is no hot tub. I insist on seeing for myself. Leaving Todd behind, I walk down and then back up a three-story high set of wooden stairs to the hot tub. I return with photos that confirm that, not only is the rio is too high for the hot springs to spring forth, but the tub is far from ready for use. 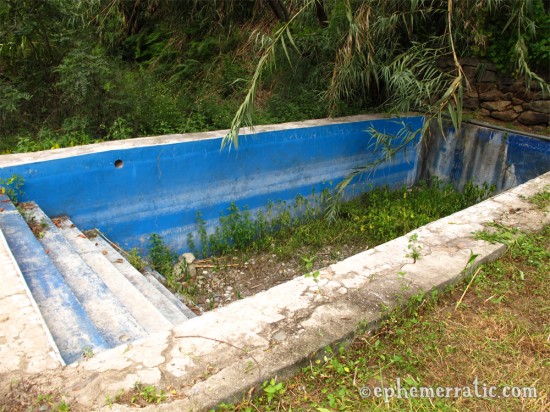 Give it a few weeks. They’ll do some weeding.

I cry enough tears to fill the tub, shake it off, and pout over a beer with a sensational, lightning-lit canyon view.

It’ll have to do.