The greatest fool in Peru

During dinner in a rustic hiker guesthouse at the bottom of Colca Canyon, Peru, Todd decides to treat our fellow travelers to a conversation to remember, for all the wrong reasons.

His choice? A story about a penis. 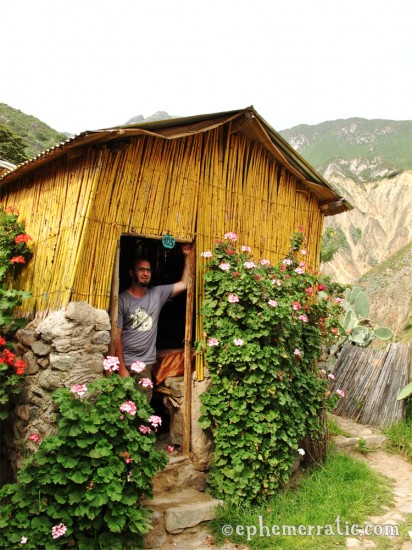 Todd and I have had many memorable conversations with other travelers. Most were fun, even kicking off lasting friendships, and rarely were they insulting. He and I are recovered New Yorkers, so conversing with strangers comes easy.

Over picked-clean trout skeletons and steeping cups of coca tea, we struggle to talk with the three other trekkers staying the night in the tiny village of Llahuar. The chatter thus far has been polite, intermittent small talk, far from enthusiastic.

It’s a tough room. All five of us lack energy, having spent most of the day hiking Colca Canyon’s soaring, challenging trails in unseasonable heat. We’ve gathered under a lone, generator-powered bare bulb, our only light for reading each other’s body language and facial expressions. The open-air dining lounge, which during the day is wrapped in gorgeous views of the canyon, at night feels cavernous, inundated with the white noise of rain-gorged river rapids and some twitchy moths. 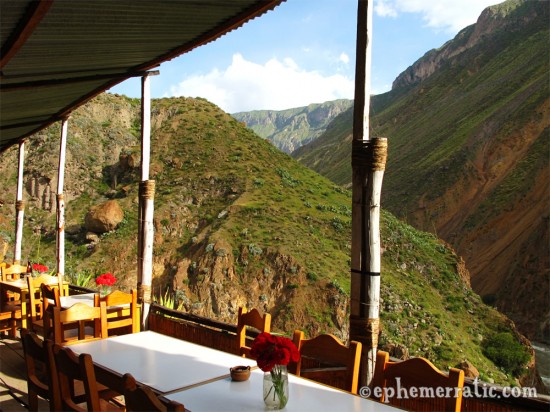 Our dining companions include a Spaniard from the Canary Islands, fluent in all three languages spoken around the table, but reluctant to play translator (there’s an unspoken purpose to his choice to hike solo). There’s also a French couple, who readily speak broken Spanish, but feign embarrassment over their perfectly comprehensible English.

No surprise, they all chain smoke. 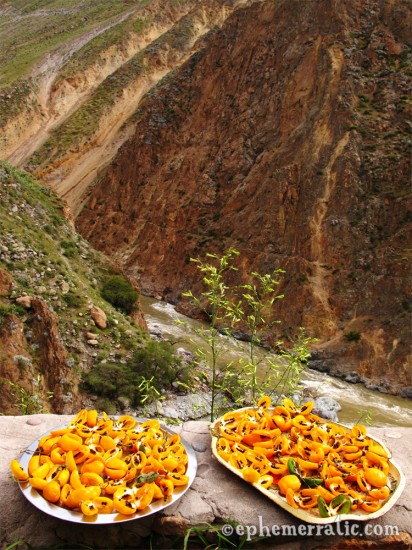 Would you rather: hear Todd’s story or watch aji amarillo dry?

Angling to appeal to the Frenchies, Todd decides to tell one of his favorite quirky stories from our round-the-world trip, which comes with a French punchline.

To Todd, telling a joke in English to a group of people who speak it as a second language isn’t enough of a linguistic challenge. Instead, he decides to tell the story simultaneously in fragmentary Spanish, French, and English — three languages he admits to being pretty bad at.

I believe the words for this are loco, fou, and cocky. 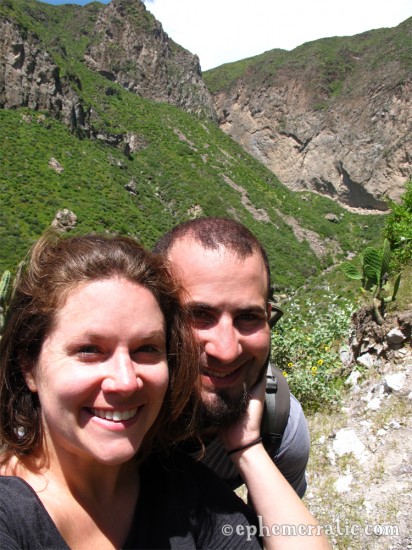 Does he look loco to you?

What’s usually a two-minute tale about making American-style brunch in Paris for Parisian friends expands threefold from the trilingual telling. Todd finally gets around to the climax:

If you don’t understand the mishmash, here’s a rough translation:

When I came back from the market, I told Benjamin what I’d bought for brunch.

Ben, he laughed a lot.

The only sound at the end of Todd’s story is canyon air being inhaled through tobacco. Then, the French couple shares a silent glance of gleeful comprehension. Their laughs come after enough of a delay past the punchline that we know that their amusement has another trigger.

The French man explains that Todd’s mis-order was worse than we understood. “Saucisse,” he sniggers, “also in French is, ah, slang, for penis! You…you, in fact ask for ‘penis penis’! Yes, penis penis!”

This finally gets everyone laughing, even the introverted Spaniard. In our trifecta of shared languages, the Spaniard declares, “Todd, now you mejor gracioso en Francais, Español, and English!”

Since mejor gracioso can mean both “funniest” and “a great fool,” this is a backhanded compliment at best.

It’s no surprise when the French couple decides to skip breakfast rather than endure another one of Todd’s belabored nouveau-Esperanto stories. We speculate that, since they’re French, a couple of cigarettes are all they need to start the day anyway.

Do you have a penis joke or story, ideally related to travel? Keep ’em PG-13 and share them in the comments below!