Sacred and profane: Put a tout on it

We avoid making eye contact with most everyone in Cusco‘s Plaza de Armas. Being so shifty eyed makes chilling out on one of the main square’s park benches a little awkward. We want to people watch, because there are just so many, so varied people. But, make eye contact with the wrong person and they’ll pounce with a pitch.

This is how it goes in the town of the touts. 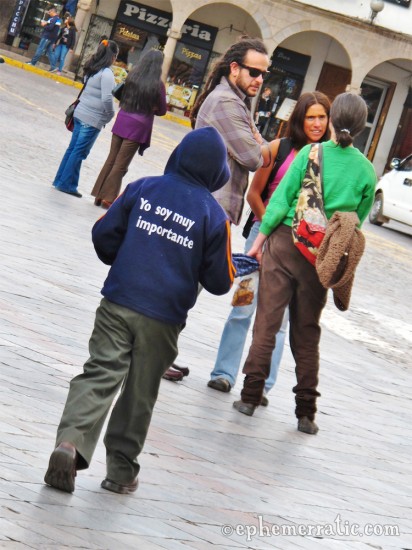 Though really, it’s a fair game the touts play. They’re not the only ones profaning the sacred beauty in and around Cusco.

Plenty of tourists treat Cusco like an amusement park, boozing it up between rushed photo-op excursions to the Incan sites (not that we’re against boozing it up). Hippie kids come to town for an “authentic” ayahuasca experience, buying their hallucination hopes from the same shop that sells them a ticket on the bus out of town. Brits and Americans tie one on at Western-style pubs, surrounded by all the comforts of home.

Someone local is bothered by the profanity of the new wave of foreign invaders. Todd and I make an unlucky turn down an alley where the sewer is being de- or re-constructed. Rushing to escape the stench, we pass a cluster of street art that has escaped the whitewash that has sanitized most of town. Beneath a satiric stab at Starbucks, which has an enviable and obnoxious location in Cusco’s main square, a stencil reverses the typical roles of local and tourist. 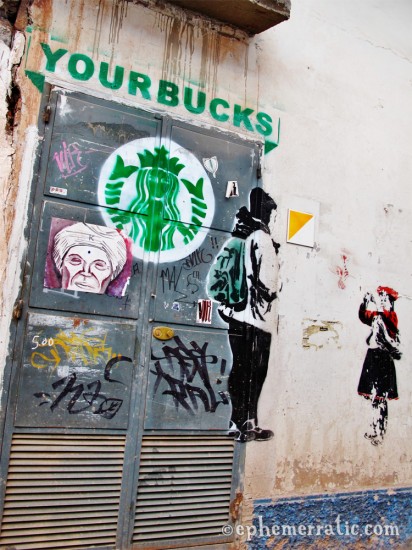 So, of course the touts flock to where the tourists hang out, like bees to picarones. We can’t come within a block of Plaza de Armas or any church of note without someone trying to sell us some paint-by-number quality art.

Even at Cusco’s famous Incan ruins, Sacsayhuaman, touts stalk the entrances. Looking the touts over head to toe Todd puns, “Gotta give the touts here some credit. They wear many hats.”

This tout wears — and sells — many hats

Everyone seems to get something out of this arrangement. It’s hard to tell which side is the most profane and which group, if either, is the parasitical one.

In case we still hold any illusions about Cusco’s volumetric gift-shop-commerce focus, when Todd asks a young woman if she has other gourds carved into guinea pigs, she takes us into the shop’s back corner. There, she lets an avalanche of gourds out of a large rice bag onto the floor. Guinea pigs, owls, women, and men hit the dirt floor like Peruvian Weebles. Todd has a herd of guinea pigs to choose among. 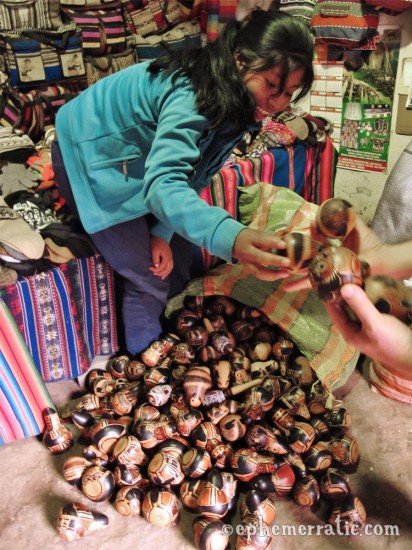 Shop girl and avalanche of gourds

Just as we start to think that all Cusco traders order their wares from Oriental Trading Company, we walk by a woman selling a knotted belts, displayed in a neat, small pile on the sidewalk. She’s head-to-toe dusty from sitting roadside all day, her skin more wrinkled than not. She has one end of a belt in progress tied around the toe of her shoe so she can pull the belt taut as she knots new rows of string.

“Si!” she smiles at us. “Something something trabajo something mano.”

Later, walking the hills of Cusco’s San Blas neighborhood, we spot another sidewalk vendor. He’s all smiles as we watch him tightly knotting black string, transforming the threads into a intricate, wide bracelet. The resulting all-fiber jewelry looks like it’s been carved from solid material, with whorls and piercings holding tight around a large centerpiece stone.

We’re cash-less and in a rush to do, see, consume — or just pick up our laundry so we have clean underwear for tomorrow.

In full putz mode I walk away, empty handed, from a man who’s toiled with his hands to create something for someone like me. If only I’d bothered to appreciate the beauty. 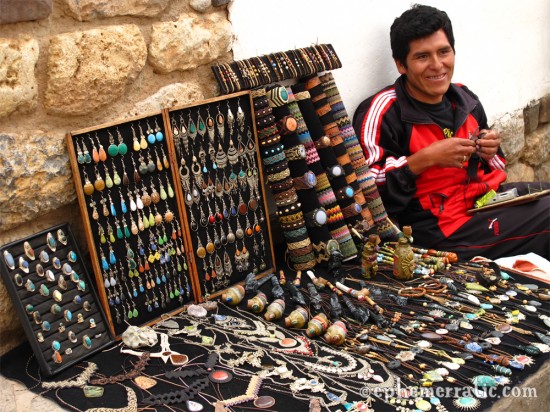 Making bespoke knotted jewelry on the street. I regret not buying something.